Batfan175 wrote: ↑
July 22nd, 2019, 9:42 pm
Well at least I ain't cheerleading the big corporate brand that has a stranglehold on the popular culture. At least I am not praising box office return as a reflection of artistic quality of a movie to validate my opinion. At least I'm not applauding a decision corporate executives made just so they could increase their box office returns. I'm sure nothing but original stuff will be made with the money that Disney made instead of pointless remakes of animated classic features or endlessly bland superhero stories. Now here, have a cookie for telling the big mean guy on the Internet not to pick on the small and frail multibillion dollar Disney corporation.

I’m glad that this movie is No.1 in the world (and of all times) because now every person that liked it has a chance to point at the number and say: ‘See this?! This means my opinion is better than yours, bitch!’ ...and it truly is. And it feels so damn good to be validated as a human being like that.

It was truly tough for Disney to beat Disney with this but Disney managed it in the end though. And that's all that matters, no?

Now nerds who paid tickets, bought merchandise, etc. for ten years can all go 'I did that. I helped Disney beat Disney.' Isn't that wonderful?

For the record, I'm with Batfan on this one... sort of. I don't care that they did it, but how they did it and why was a little "eh."

If Nolan did his typical IMAX re-releases and during Oscar season or for his anniversaries and such, those kind of make sense. If they broke box office records and/or milestones along the way, I don't really find it incriminating to do. I'm not saying because it's Nolan, but for his movies in particular with the IMAX staple, that seems to work (or if he did that post-conversion 3D with Inception or something).

But this was blatant. Endgame wasn't even out on home video yet. Actually, that speaks largely to the point... those six bonus minutes would have been on the second disc for home video or whatever, and at that point people wouldn't have paid to see it in theaters, so they had to rush it out the door.

What really gets to me is the content, though. This wasn't just a re-release, the angle was that they would get more footage. But what was it, exactly? The scenes are all post-credits (which they did announce, but is still rough that it's not integrated within the timeframe), and one is an actual deleted scene (who knows if it had finished CGI, color timing, sound mixing, etc.), a tribute to Stan Lee, and a clip from Spider-Man: Far From Home (which is totally out in theaters). Like I said earlier, they were home video bonus features, not an extended edition of the film.

What the bonkers is that? It feels like a bit of a cheat.

Now nerds who paid tickets, bought merchandise, etc. for ten years can all go 'I did that. I helped Disney beat Disney.' Isn't that wonderful?

I counted five Disneys. Marvel, Pixar, Disney, Star Wars and Avatar. You sir, are a genius. Now go back to GOT thread and gamble your entire existence on it.

Or not. You can also condescend the fuck out of every thread round here, surely bringing you more and more admirers; makes for a lovely time at the internet. 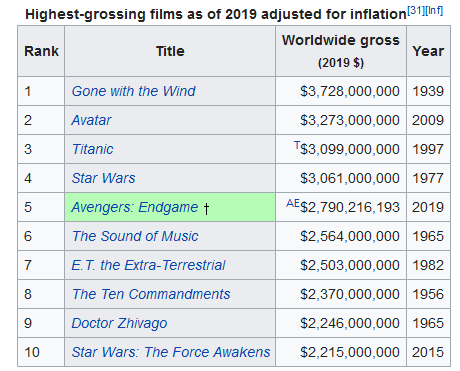 I'm really amazed to see The Sound of Music on this list. All the other ones are pretty much what you'd expect the list to look like. Huge modern blockbusters, the greatest movie of all-time, big classic epics. But a musical is a surprising entry on the list. Just like The Exorcist's position on the domestic list adjusted for inflation. These must have been huge hits that nobody expected. Kind of like Bohemian Rhapsody shocked everyone with how much it earned last year but x1000.

I really don't get why Doctor Zhivago made so much damn money??

I really don't get why Doctor Zhivago made so much damn money??

First of all, it's AMAZING. Second of all, it was David Lean's next film after the masterpiece that was Lawrence of Arabia, so a lot of it came on the hype and the financial and critical success of that film. Thirdly, it's a literary classic. Finally, it came out during the Cold War and in the middle of the Vietnam War when the fear of communism was high so a movie dealing with the rise of communism would be an incredibly fascinating insight. Also, it's an all-time epic with an international star back in the day, Omar Sharif.