m4st4
Posts: 54463
Joined: May 2010
Location: Arrakis
I was in cinema, 24 years ago. There was snow when grandma, mother and I came outside, still shook from the experience. This movie has no chance against my vivid memories, but even if I put aside my feelings towards the original, this feels like Gus Van Sant’s Psycho meets National Geographic.

BlairCo
Posts: 19749
Joined: June 2011
Location: The Ashes of Gotham
Contact:
Contact BlairCo
Website
It's literally just a 3-4 minute scene brought down to about 70 seconds. It's the first scene of the movie, which was inevitably going to be in the movie, in what is essentially an announcement teaser. What were you guys expecting?

I bet that if the teaser showed us something new that wasn't in the original, everybody would be saying "Looks nothing like the original. Now I'm worried."

Bacon
Posts: 25736
Joined: June 2011
Teaser was good
Batfan175
Posts: 4246
Joined: January 2012
This film will likely be longer and does not look as good as the animated film they made in the 90s. It also seems once again like a beat-for-beat retelling of the same story. That to me seems really lazy and safe, so in other words, it's Disney.

If Disney made live-action films that weren't remakes of their iconic animated films I'd be interested. As it is, I will avoid each and every one of these because this trend is actually worse than the straight-to-video sequels. Those at least told stories that were different from the original.

Pratham
Posts: 13529
Joined: May 2010
Location: Mumbai
Well Di$ney shelved Tron 3 (for which I'll never forgive them) after their 'original' live action movies The Lone Ranger and Tomorrowland bombed and that should tell you about their priorities. 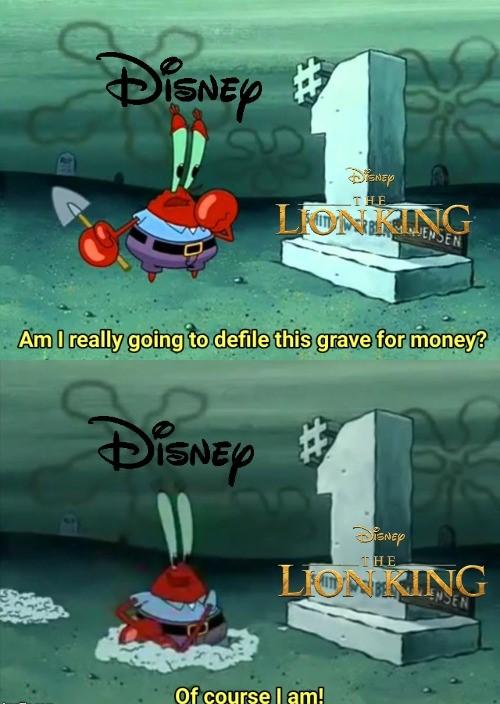 DHOPW42
Posts: 2680
Joined: January 2009
Location: Budapest, Hungary
It's really a shame that the studio that made the original, which is a classic, honestly thinks that this is a good idea.

I know it will make a quadrillion dollars an it will probably be a solid, even good film, but what's the point? The original looks MUCH better, it has a much richer visual palette, the story is the same (I guess the exact same), so... I'm baffled by these projects.

Do they seriously need another reason? I refuse to believe that you actually don't see the point in this movie being made. Being sceptical about the project's quality based on what you think about the quality of the original is another thing, but if it turns out to be a good movie, why on earth does that matter?